There’s something quite odd happening and I don’t think it’s just in my office.  The best way to describe it is by comparing it to the aural experience of waking up on a winter’s morning when you know before pulling back the curtains that you’ve had a good covering of snow.  Something quiet and deadened about the air that makes you realise the world looks a little different, without actually seeing it.

What am I referring to?  A part of office life that I thought would always be around, irritating and frustrating at times whilst funny and interesting at others.  Good old office gossip or as I’d prefer to term it the grapevine.

The fact is I think it’s almost disappeared, not that it was ever a major issue in the firm but like most things you don’t know how important it is until you no longer have it.  I hear the same story from other businesses who have noted the behavioural shift in their companies.

Now, you might think it odd that a business owner is advocating the merits of gossip in the workplace.  I must stress that malicious and hurtful hearsay can cause significant distress and lead to disciplinary or dismissal and this is to be actively discouraged.  It’s an extreme variety of communication that we can do without and there needs to be a clear distinction as to what we mean.  What I believe is a useful thread in any office is the casual chat at the water cooler, social chit chat and nod and wink over the “tittle tattle” within the business.

As the owner or manager of a business you just had to accept that it happened and trust your staff to be discrete having set out guidelines for acceptable behaviour in an office manual.  In reality it provides a really useful social platform for colleagues to bond and an informal hierarchy whereby those who don’t have company given authority are given higher status through their ability to source the most interesting snippets having perfected the art of telling the tale. 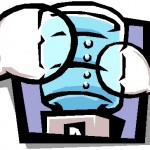 We now live in an internet, smartphone world where communication is almost entirely on a screen.  The office social chat can be consigned to an e-mail or text but lacks the interactivity and enjoyment of the face to face experience.  It’s also more dangerous on the web or via text as the records are there to be forwarded, copied and taken out of all context.  We’re also time starved – grabbing lunch at our desks not sitting in a canteen for a full blown sausage egg and chip lunch.

What we used to call the “grapevine” has withered through a combination of keeping ones head down, increase in workload and turning to alternative forms of communication.  There is also the generational factor in that the younger members of staff have little experience of office social etiquette, the unwritten rules and craft perfected by the older, wiser heads.

Some may be glad of the demise of office chat; some may argue it’s very much alive.  All I can say is if it’s doing no one any harm any opportunity for staff to enjoy a little moment of conversation and a lighter moment in their day can be no bad thing.  Just don’t be talking about me unless your saying nice things!

Have You Heard the Latest Office Gossip?