Unless you’ve been tucked away on a desert island without internet, TV, phone or radio you can’t help to have been exposed to a never ending parade of people posting short videos of self-emersion in cold water. The #icebucketchallenge (don’t forget the hashtag) has become a phenomenal success for the charity that took ownership of the act – the ALS Association representing those diagnosed with Amyotrophic Lateral Sclerosis.  The disease is also known by the name of US Baseball legend Lou Gehrig who died at the age of 37 in 1941. 2 years prior to his death July 4th 1939 he gave an emotional farewell speech to a packed Yankee Stadium stating that despite his diagnosis he considered himself “the luckiest man on the face of the earth”.

The disease is reported to affect some 450,000 across the globe.  A diagnosis is devastating as tragically the body shuts down and life expectancy from that point is a shattering 2 years. In the UK we use the collective term Motor Neurone Disease.  It covers a range of conditions such as ALS that cause the death of nerve cells controlling muscles and thereby gives rise to degeneration. It’s fortunately rare but nonetheless a terrible condition that often strikes the sufferers down in the prime of their life. ALS is the specific condition behind this most recent viral sensation.  A very worthy cause and one that deserves to receive recognition.

The current campaign has been one of the most successful viral events of all time.  The results are quite staggering. The ALS Association has raised some $62m in just 4 weeks that’s over 30 times the $2m they raised in the same period in 2013. They have an amazing 750,000 new donors and the numbers just keep on growing.

MND the Motor Neurone Disease charity has also benefited by an additional £250k donated as a result of this campaign. So how did this happen? As most will testify, cause related campaigns on social media sites are nothing new. Facebook in particular is frequently used as a launch pad by fundraisers to reach as many potential supporters in a short time at little cost.  It can be very effective, I know having raised a few £’s over the years with my running but that is but a tiny imperceptible spec compared to the massive wave of ice bucket drenched donors. The previous success of the #nakedselfie #nomakeupselfie was impressive. £8m raised for Cancer Research in just 6 days.

The ALS campaign appears to have been given a far bigger boost and the momentum just keeps taking it forward.

The challenge sets out very simple rules.  Once nominated take the ice bucket challenge and donate $10 to ALS, if you don’t take the challenge pay $100.  When taking the challenge record the act on video and upload as proof, post on facebook or another social media site of choice having nominated 3 more individuals to take part who in turn have 24 hours to complete the deed.  Simple and very effective.

The factors for success: Humble beginnings & credibility – The ALS challenge was started by the friends and family of a former Boston College baseball captain, Pete Frates who was diagnosed with ALS at 27.  The initial post of a video was of others taking the challenge as he was too weak to participate.  Those family and friends challenged local Bostonian athletes to follow suit. Nominations spread through the Boston area and soon enough athlete’s across the US including many major stars were taking part for Pete and others with ALS.

Pete Frates Fight Against ALS – The Start of the Icebucket Challenge

Celebrity power – Soon Hollywood and the business community got the call through nominations and celebrities were engaged.  Mark Zuckerberg, Richard Branson, George Bush, Lady Gaga, Victoria Beckham….the list is extensive and adds hugely to the attraction for others to participate having seen their favourite singer, actor, entrepreneur take the challenge.

Narcissism – Ok this is a little negative but social media does offer us an opportunity to “perform” to a wider audience, be centre stage and demonstrate our caring and charitable efforts. Most of us want to be loved, at the very least liked by others and this just works very nicely.  But who cares it’s raising money for a great cause.

Competition – As seen with many celebrity posts there’s been a fair share of “anything you can do…” iced water dropped from helicopters, thousands of dollar bills not water falling from the bucket (Charlie Sheen) and self-made apparatus (nice one Bill Gates). This effort has been replicated by many non-celebrities with terrific imaginations finding new and whacky ways to go that bit further when taking the challenge.

Simple – You don’t have to train for this.  It’s not a marathon or even a fun run you just have to stand or sit and take a cold shower. So it opens the challenge up to young and old alike, fit and those not so fit which makes the potential participant demographic very wide.

Connectivity – the opportunity to involve members of your own network through nomination feeds wonderfully into our desire to connect to family and friends through social media.

Technology – the proliferation of smartphones with video record capability enables millions to participate.  This added to an encouragement to users by many platforms to make video related posts and as a result easy to use upload apps means the task of sharing such events has never been easier.

The above ingredients all combine to produce a campaign that has every chance of becoming one of the biggest viral events ever seen.  Predictably this success has caused side effects such as the bandwagon jumping of others to benefit from the trend.

One notable example is Macmillan Cancer Support who leapt onto the challenge and attempted to claim the #icebucket as their own.  As a result they’ve received considerable criticism not helped by the Head of Digital for the charity quoting their missed opportunity with the #nakedselfie as justification for jumping on the ALS campaign.  Just Google “ice bucket challenge” and you’ll see that Macmillan have gone to the trouble of taking a paid keyword advert placing them in top spot on the search engine.  Many have complained that they donated via a short text code advertised by Macmillan thinking it was for ALS.

My advice to Macmillan is to spend time and effort working to create original ideas that will bring credit to this great charity and not ride on the back of other charities innovative drives.  Yes, the ice challenge has been used to raise awareness and funds for their chosen charity in the past and no doubt the future too but leave it to the individuals to make that choice.  It was Pete Frates friends and family who drove this phenomenon and that’s what makes it a true viral success.

Have I taken the challenge?  Oh yes I was nominated and had some fun doing it too.  I did use the opportunity to raise awareness of 2 other charities I work with but didn’t overlook the fact that it’s the ALS campaign first and foremost so they too benefited from a donation. 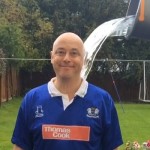 No one should feel forced to take part and be bullied or otherwise pressurised into taking a dowsing for ALS.  It’s voluntary and an individual choice that others should respect. Unfortunately there have been examples of peer pressure and negativity thrown towards those who’ve not followed their nominators’ request.  That’s not how charity works and is one of the uglier side effects of such successful viral campaigns. Overall the positive far outweighs the negative.  I say congratulations Pete Frates and your inspirational friends and family.

The ESPN video is certainly worth a watch and helps put this campaign into perspective. It proves the power of the human spirit and the ability to turn such a negative situation into something so immensely positive. If you have any comments on this or any of my articles please feel free to add them here.  I’d love to hear your experience of this and other charitable campaigns. David Laud