Some of you who are old enough may remember the infamous poster campaign by the Conservative Party for the 1979 election.  The Tory leadership made the brave move of recruiting Saatchi and Saatchi, advertisers at the top of their game, to help win them the votes required to run the country. 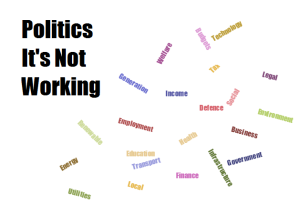 The “Labour isn’t working” campaign was met with obvious hostility by the then Prime Minister Callaghan, it was quite a departure from previous electioneering and heralded a new chapter in British politics.  Now that slogan, whilst clever, looks quite tame set in the arena of UKIP, SNP Cleggy, Cammy and Milly who think nothing of scoring points through low blows.

What strikes me as being another evolution in the game of electing a government is the similarity between them all.  Take away the accents, gender and ok UKIP and the main thrust of what these main parties have to say is pretty much common.  Health, defence, education, employment, housing, tax you name it they’re all squabbling over the minutiae, there are no “big ideas” mostly because there’s no big budget to pay for them.

So the British electorate is asked to make a decision based on what?  Haircuts, smiles, personality, passion, compassion, intelligence, debating skills…have we seen much by the way of leadership?  I don’t see it.  Instead it’s negative campaigning, mostly looking over the shoulder at what others are doing and trying to edge ahead by degrees rather than engaging with the public and asking what would really make a difference.

Some say we’re moving ever closer to US Presidential style elections and of course that is all about the personality, sound bite and very cute management of social media channels. But as we’ve seen from the charismatic Obama, a winning smile and good looks for leading man and his impressive first lady don’t guarantee an easy ride.  The senate fought Obama’s health reforms every inch of the way and his standing has suffered as a result.

The term of office for any party in power in Britain is 5 years but in reality that probably 3.5 years. First 6 months just getting organised and the last 12 months preparing to stay in the hot seat.

Just over 3 years to set out plans and make them stick with a group of Ministers picked from the “old reliable” bank and new blood to freshen up the view, but how qualified and prepared can they be for their posts?

Like many I am disillusioned by politics but remain fascinated by it. I recently sat in the audience at BBC’s Question Time and whilst it offered an experience to remember the show was dreadfully dull and offered little inspiration.

Quite often the most engaging individuals are a-political, managing to put the common sense view that we’re all thinking, or at the very least wish we were as articulate in putting forward.

For what it’s worth here’s my view on what we should do.

The outcome…it would provide a structure not unlike many businesses with a board of directors and a CEO in charge.  Their focus will be on achieving individual goals which collectively move the country forward.

Getting away from the party political aspect and focussing on differences in achieving very specific outcomes with individuals who should be experienced in those fields.  Shouldn’t we be getting the best possible talent in place to manage our country, rather than career politicians who can swap from department to department whilst hoping they hold their local seat?

As for local government this should be devolved away from central office. Locally elected individuals will still have responsibility for their communities but they won’t be expected to live in London or commute to Westminster.  Instead they will be voted for on the basis of what they will do for the local area and ensuring they work with the relevant departments to achieve those targets.  Councillors already perform this role and I would see no reason why they couldn’t be developed to have greater powers and access to those running the departments.

I suspect the money saved would be considerable and we would all have a much clearer idea of what we were trying to achieve.  We may not all agree with each policy of every department but we will understand that those in charge will be responsible for delivering and if they fail, it will be highly unlikely that they’ll get another chance. On the other hand successful Minsters could potentially have very long careers heading up their particular department.

Politics in its purist sense will not disappear it’s a part of our lives but the damaging and dated party system needs to go and be replaced with a system that suits our needs now.

Revolutionary thoughts?  Well I wouldn’t wish for riots and physical fights.  We need a sensible, intellectual debate about how we run our country and hopefully one that will shake up the traditional ingrained approach to solving what are extremely challenging issues.  These are big challenges for the country and it’s quite worrying to think their management could be left in the care of amateurs schooled in the art of politics.

These are my views, please let me know what you think.