As Barack Obama appeared through the huge curtains at the Chicago Convention Centre his smile said it all, the crowd nevertheless said it for him, over and over again, a little like a re-tweet, “four more years, four more years….”. 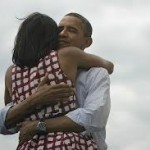 With the economy far from recovery and very tough times forecast the US electorate have remained faithful to the Democratic Presidential incumbent.

Obama’s feisty Republican opponent, Mitt Romney had but one task, admit defeat gracefully and in a very public address he did just that.

No doubt the networks will be poring over the multitude of statistical data that such events spew out but for me there is one clear set of statistics that left me in no doubt of the outcome.

The evidence was part of our modern history.

In the Spring of 2011 a political wave started, initially overlooked by those in power. All too soon their underestimate of the strength of this wave became apparent due in no small part to the turbo charge push of social media platforms.

But four years before the Arab Spring, back in early 2007, a relatively unknown senator was running for president against Democratic nominee and household name, Hilary Clinton. But on November 4, 2008, Obama then 47 became the first African American President winning an election against Republican candidate, John McCain.

Fast forward to the US election of 2012. Presidential wannabe Romney was trying hard to compete on twitter, facebook and Linkedin but unfortunately for the Republicans he was up against an opponent who is a natural social media communicator with a team of dedicated experts supporting his social media broadcasts.

Enough of this blogging rhetoric what about the facts?

As if those figures weren’t bad enough Michelle Obama has more followers than Mitt at a very healthy 2.2 million.

Of course it’s not all about the numbers but if your message is being broadcast at those levels through these channels you have a major advantage, especially if your demographic fits the profile of the more active social media users.

As if to prove the point Obama’s victory tweet showing his embrace with wife Michelle and the quote “four more years” is now the most re-tweeted tweet of all time, so far RT’d over 650,000 times beating someone called Justin Bieber (you know who he is you just don’t want to admit it – ed) who’d held the record at 223,000.

Whether it proves to be the right decision for America only time will tell but one thing’s for sure, if a politician has any serious ambition they need to understand and harness the true strength of social media.

This site uses Akismet to reduce spam. Learn how your comment data is processed.